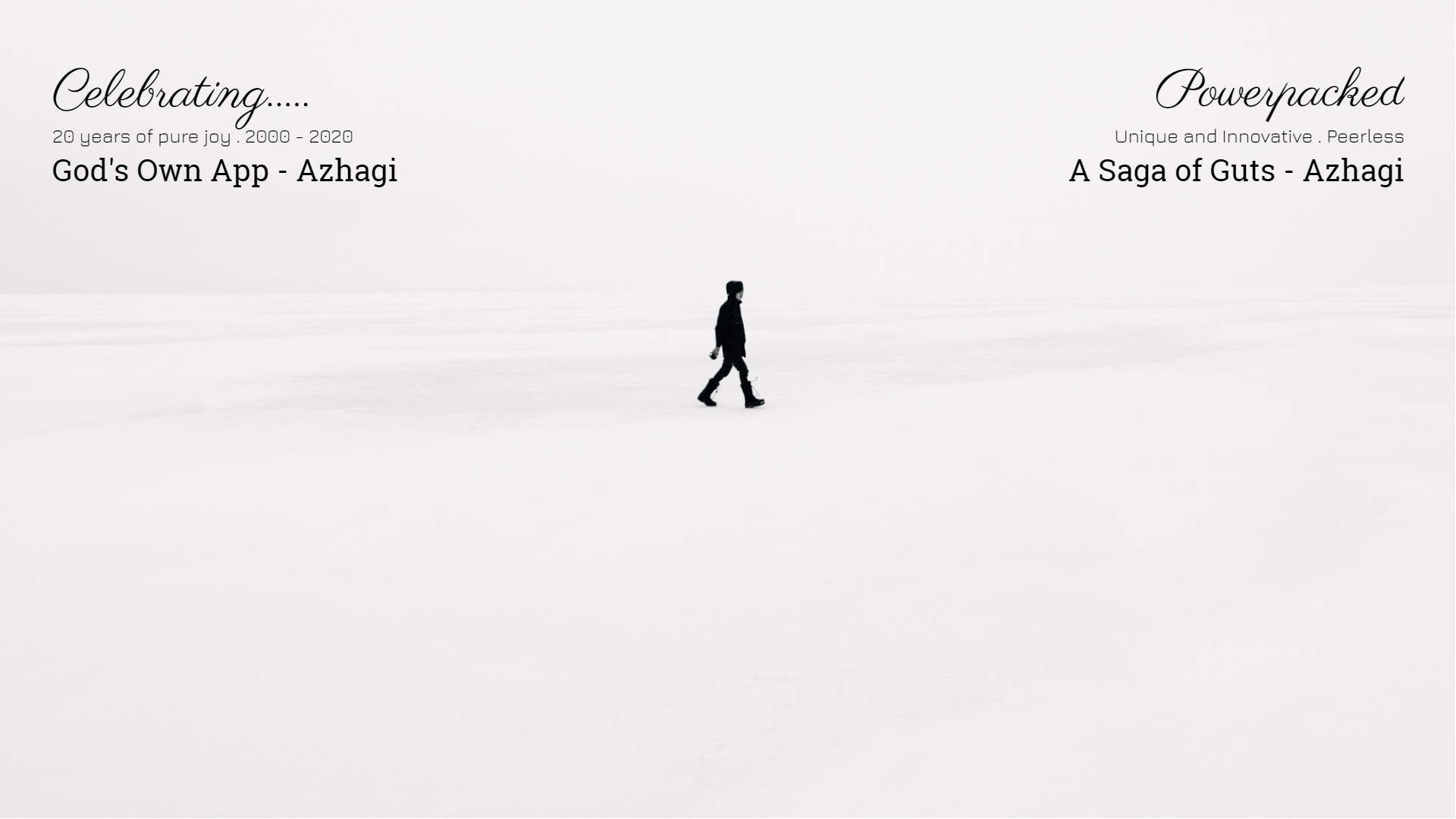 See what the media has to say about Azhagi here.
There are 3 Wikipedia pages on Azhagi - in both English and Tamil - Page 1 | Page 2 | Page 3 - you may kindly have a look
Users of Azhagi are varied - individuals, professionals, companies, etc. Have a look at a few of them here.
"The proof of the pudding is in the eating", it is said. So, please read what users have to say on Azhagi here.
Innovation is a way of life. Please read inno.html on what I have to say on innovations.
"When someone shares something of value with you and you benefit from it, you have a moral obligation to share it with others" - says a Chinese proverb. So, if and when possible, kindly spread the news of Azhagi apps and all apps of their kind.
No money is asked herein. It is something else. So, kindly visit this page and see what best you can do to contribute to Azhagi.

Transliteration at its best

one of its kind

Extendable to type in any language, any font, any keyboard

Multilingual transliteration at its best | An extraordinary Tamil fonts converter

innovative . feature-rich . portable . one of its kind

Extendable to type in any language, any font, any keyboard

My Windows freeware are sleek and small, yet power-packed with features, some of them being special or unique - viz. change existing key mappings, create your own new keyboard layouts, transliterate in ANY Tamil font, etc. You can read all about such unique features here.

In any case, step-by-step installation instructions are available here.

16 languages with multiple keyboards, by default. But, you can easily extend Azhagi+ yourself - to type in ANY language-font-keyboard combination.

And, there are some 'optional' downloads too - Classic Azhagi, Portable Azhagi+, Free Fonts - here.

Please do fully read this section.

Azhagi works both in MAC and Linux, but only under Wine environment. You can read details of the same here.

If you need to use Azhagi directly in MAC and Linux, without the need to install Wine, then it is not possible, as of now.

There is no version of Azhagi for iPhone, as of now.

Sleek, portable, less than 1MB, 16 languages, change existing key mappings, create your own new keyboard layouts, extend to transliterate/convert in any Tamil font, extend to type in any language/font/keyboard, and more...

Azhagi+ is a supremely easy, fast, unique and feature-rich transliteration software. Primarily it helps one to type in 16 Indian languages* but it is easily extendable by the user himself or herself to type in any other language of the world too. Typing can be effected directly in any Windows application (MS Word, Facebook, WhatsApp, Quora, SMS, Gmail, Twitter, PhotoShop, PageMaker, InDesign, CorelDraw, Skype, Excel, PowerPoint, etc.) by the simple press of an hotkey.

Azhagi+ is sleek and portable. It is very small (less than 1 MB) yet power-packed with innovative features.

Azhagi+ has possessed the fastest of all Tamil transliteration schemes, ever since its inception in 2000. You can quickly extend Azhagi+ to transliterate in any Tamil font by using a never-before-seen feature. You can easily extend Azhagi+ to type in any language+font+keyboard combination by availing a very special feature. You can very well change the existing key mappings, have custom hotkeys to toggle between languages, utilise an in-built font viewer, avail a first of its kind Tamil font converter which is extendable by the user himself/herself and do much more...

What's so unusual about Azhagi?

Click here to read the story of Azhagi's evolution.

The best way to contact me is through Azhagi Facebook Group. It is a public group. So, anybody can read the group's contents even without joining it. However, to post your queries, you have to join the group.

'Azhagi Facebook Group' is not only a dedicated support forum for Azhagi but an informational forum too - on Azhagi and other Indic softwares.